Final Project : The 5 Muses of the Apocalypse

It hath arrived: the final project. What I decided to do was to basically write character songs from all the novels we have read (excluding Zone One because I can only write so many songs in one week). I will explain the musical choices and lyrics below the lyric videos. All pictures are taken from here. I HIGHLY RECOMMEND ​listening to these songs with headphones. Also, please note I wrote and sang all of these within like, a week, so it's not the best. Please have mercy.

I actually started writing this song three years ago to different lyrics at the peak of my high school angst phase. I picked it up again at the start of quarantine. The piano at the beginning of the song reminded me of being on a boat, trapped in the dark waves. The song is in the time signature of 6/8, attributing to the "rocking" feel (It can be counted by 3's) It was meant to encapsulate the feelings of instability and loneliness that come with isolation.
I felt this song strongly related to Toby's character, as she kind of presents herself as a lone wolf. However, we get hints that she is lonely and craves companionship and belonging. So, I changed up the lyrics a bit and the song came to be. I also felt Toby was held back by her past traumatic experiences. The "her" that she references in the second verse is Ren, if you were wondering.

The one scene that really stuck with me after I read Future Home of the Living God was the end, when Cedar is reminiscing about watching the snow fall as a child. She wonders if her child, who was taken from her, will ever see the snow. The line at the beginning about Cedar realizing she "wasn't special" is referencing the beginning of the novel where she learns her heritage is not all she thought it was. The rest of the lyrics are open to interpretation.
From a music standpoint, the song is meant to be a sort of lullaby, or twisted nursery rhyme. The structure is strophic, meaning same melody throughout, but different lyrics. The chord progression used is descending and chromatic, meant to paint a picture of the snow falling. It's been used in other pieces of music, such as "Chim Chim Cher-ee" from Mary Poppins, or "Once Upon a December" from Anastasia. The flute interlude was just something I came up with in the shower and went "Ooh, that's pretty!"

I tried to come up with something better than "On the Nature of Daylight" by Max Richter, but I could not. If you read my blog, I associate Station 11 very strongly with that piece of music. So, I decided to take that piece, write lyrics to them, and sing modified versions of the musical lines.  There are actually 4 characters "singing" here, and their lyrics are as follows:

This was my favorite song to make, it was honestly so fun. Knowing the novel is essentially about the U.S. having a second Civil War, I wanted this song to have spiritual elements. For the chorus, I decided a "Call and Response" motif was the best way to go. Although it's tricky to hear until the end, there is a jazz organ playing in the background in reference to Southern spirituals and hymnals associated with the organ. A snare drum comes in during the lyric "Talk of reuniting," referencing the drummer boys that would actually come onto the field during battle just to play. The main theme I grasped from the novel was righteous revenge, so that is what this song is about. 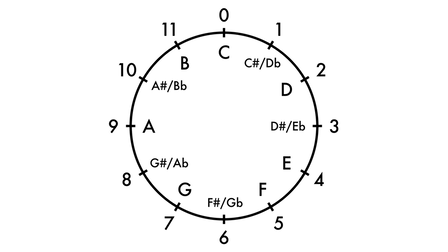 Okay, so this is the song where I dive the furthest into music theory. I will now try to explain pitch-class integers. So what are pitch-class integers? Well in Western music, we have 11 pitches. Now, imagine if we gave those 11 pitches a number to associate them with. Then, beginning on C, or 0, create a clock diagram with the numbers. You get something like the picture on the right. This tool was used for composition of a lot of music post-WWI and WWII. Why? I really don't know. This video explains it a lot better and a lot more in-depth.

Back to the song. The right-hand piano at the beginning plays the following integer sequence, in order: [4 0 e 9] then [9 e 0 4]. For the left hand, I decided to play the mirror image: [9 e 0 4] then [4 e 0 9]. This technique is called retrograding.  I used this to try and create an effect of time running forwards and backwards at the same time. You know, because the book is about time travel.
For the chorus, I decided to take the original sequence and transpose it up to C major, turning it into [7 4 2 0] [0 2 4 7]. We eventually go through a couple more chords and then land back in A minor. Minor keys are usually seen as sad or unhappy keys in Western music, while major keys are viewed as joyful. I decided to keep coming back and to end on A minor. Although Shannon comes closer and closer to thinking she's found the right timeline, she always comes back to 1985. She always comes back to her trauma about Courtney. But in the epilogue, she restarts the whole timeline again and Courtney doesn't die. She begins anew.
Powered by